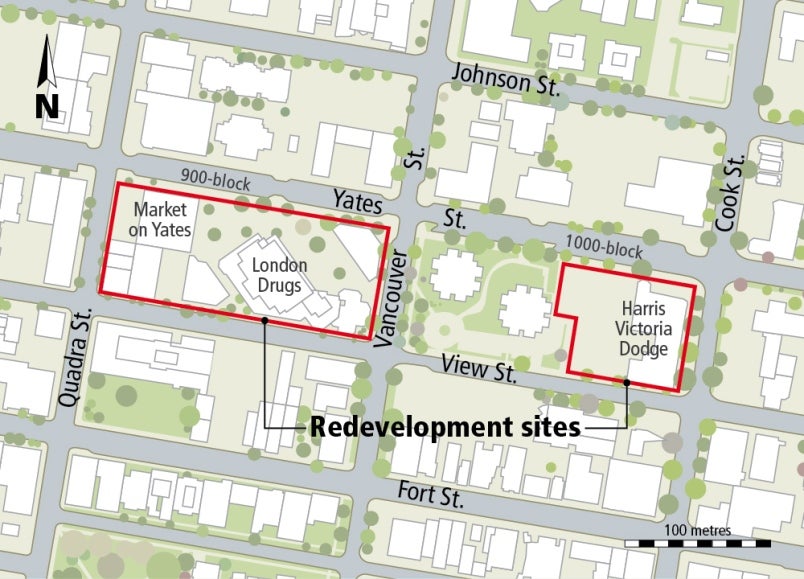 A major swath of downtown Victoria is on the cusp of being redeveloped.

Toronto-based Starlight Investments, which over the last three years has pieced together land parcels in the 900- and 1000-blocks of the Harris Green neighbourhood, is asking the public for input on what a redeveloped site between Yates and View streets could look like.

Starlight, which specializes in commercial and multi-family real estate investment, now owns all of the 900-block, which is bordered by Yates, View, Quadra and Vancouver streets. Stores on that block include London Drugs, The Market on Yates and Frontrunners. It also owns the land under the Harris Victoria Chrysler Dodge Jeep Ram dealership that is bordered by Cook, Yates and View.

Mark Chemij, Starlight’s senior development manager, said the company is excited at the prospect of reimagining the land — 4.9 acres over the two sites — and open to all possibilities as the redevelopment process begins.

“It’s a little early to provide any specifics,” he said when asked what Starlight has in mind, though purpose-built residential rental units will be included in the mix.

“Victoria has some of the lowest rental vacancy rates in Canada — that’s what makes this a great opportunity for purpose-built rental within a mixed-use community.”

Chemij could not say much about what buildings will be left as is and what will be gutted and renovated. He also said it’s too early to say who the company will partner with to develop the sites. “We are still in the early days of the consultation process,” he said. The goal is to learn what the community likes and dislikes about the site, what it would like preserved and what it wants improved.

Rob Reid is hoping his running-gear store will be left standing. The founder of Frontrunners has been a tenant in the development near London Drugs for 31 years, and in 2000 moved into a new building on the site.

“We don’t want to be reactive, so we will wait and see what the plans are and see what parts of the block are to be redeveloped,” he said.

Reid said there is potential on the site to add rental units or rebuild some buildings, and he hopes Starlight listens to the community.

“I know we need more rental in Victoria, but I would hope we don’t need to cover every single inch of our downtown with multi-storey buildings,” he said. “We don’t want to lose green space and I don’t think we want to lose local businesses, which give the community its unique feel.

“We will wait and see and try not to lose any sleep.”

The Market on Yates, which opened at the site in the fall of 1999, expects to be part of a renewed city block.

“We are thrilled that Starlight wants to redevelop the Harris Green site, and we are fully supportive of their new development that will include us,” wrote Darryl Hein, owner of The Market Stores in an email.

London Drugs chief executive Clint Mahlman said the company has been informed by the landlord that it’s looking to refresh the property, and “we would be closely consulted to minimize the impact on our customers.”

Chemij said it’s understandable that some of the 27 commercial tenants might be concerned, but it will be a long time before the first shovel hits the ground.

“It can be upsetting initially, but we want to assure everyone that we are still very early in the process. Nothing is going to happen in terms of development for several years,” he said.

“I think the site is fantastic for [rental], there’s no doubt about that,” said Holt, who nonetheless suggested the company hold onto the area’s retail mix, since it’s in high demand.

“But all that potential density in the air space above it, well good for them for looking to take advantage of that. It’s a fantastic opportunity.”

Holt said if the market remains strong, with low unemployment rates and a strong economy driving demand for housing, a redeveloped site should find a welcoming market in a few years.

“I think they are well-positioned and they may have enough capacity to be building for a decade, and over that period of time I think they will do very well.”

Starlight will hold two open houses to get ideas from the community; June 13 from 5 to 8 p.m. and June 15 from 11 a.m. to 2 p.m. at the Chapel of the New Jerusalem at Christ Church Cathedral, 930 Burdett Ave.