Rentals pitched for Douglas St, not aligned with Victoria's vision for the area 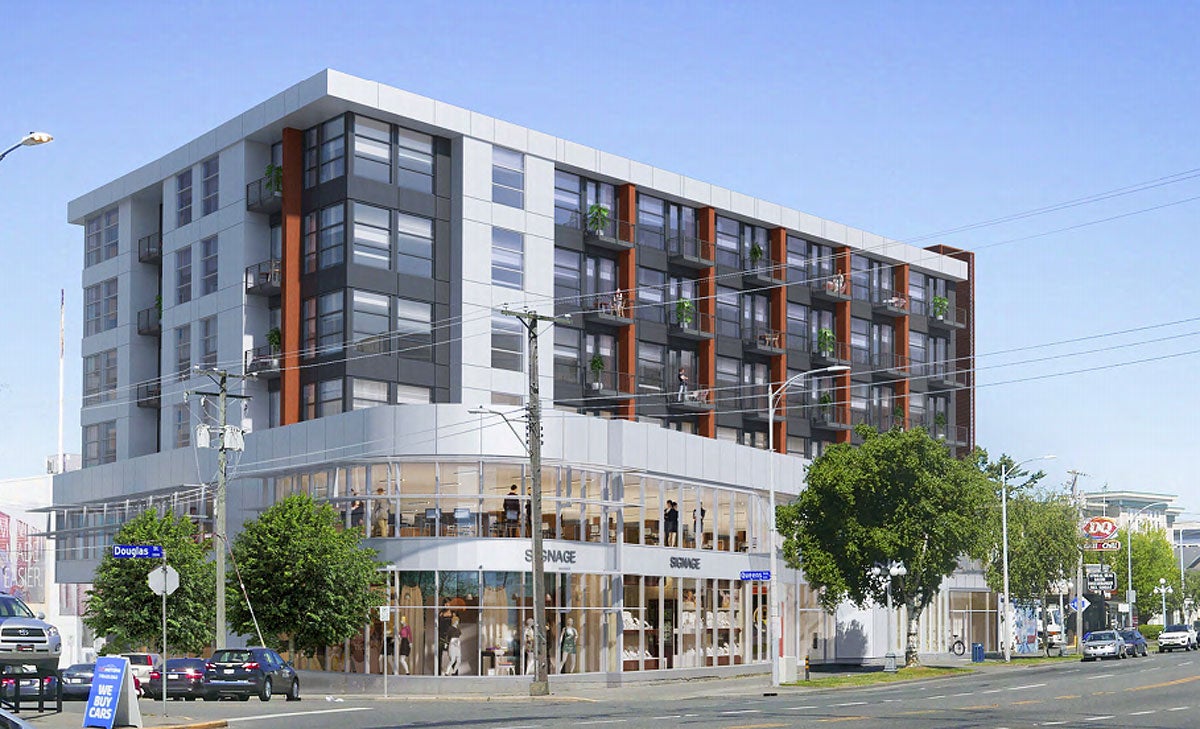 A parcel formerly eyed for redevelopment into a luxury automotive dealership with affordable rental apartments above has been cancelled and the land listed for sale.

2300 Douglas Street, a 16,000 square foot corner lot at the northwest corner of the Queens Avenue intersection in Victoria’s Burnside-Gorge neighbourhood is on the market for $3.9 million after a lengthy municipal planning process by a local developer for a mixed-use six-storey building failed to secure approvals.

The proposal had targeted upwards of 60 rental apartments in one and two-bedroom configurations with the potential for local housing provider Pacifica Housing managing the property as a below-market rental. The building’s two lower levels were earmarked for a Silver Arrow Cars luxury vehicle showroom and offices on the second floor. However, subsequent redesigns identified an alternative retail environment than one conducive to an automotive dealership, suggesting a car showroom was not necessarily the intended commercial tenant.

A decision to forgo the proposal stemmed from the City of Victoria’s desire to concentrate commercial, light industrial and retail operations along the northern stretch of Douglas Street in lieu of mixed-use residential projects, something Ross Marshall of commercial property brokerage CBRE Victoria says could be a prudent move by the municipality.

“Given the lack of industrial land supply in Victoria and the region’s core, I can see the future of Douglas Street north of downtown catering to commercial uses than I do residential,” Marshall said. “The City of Victoria would like to maintain a commercial presence along Douglas Street to build out employment opportunities with light industrial in the mix, and with that in mind residential spaces may not be the best fit.”

Marshall also says the market is eager to tap into a lower cost alternative to downtown Victoria’s high priced office and commercial leasing opportunities, with Burnside-Gorge a suitable area in which to offer modern work spaces at rates below those in downtown-proper.

“There is growing demand among commercial tenants for properties within reach of downtown Victoria, but not necessarily in downtown Victoria. Cost is a factor for these businesses, and if the properties are a little less expensive in Burnside-Gorge I believe there is a market for that.”

The 2300 Douglas Street proposal is now the second mixed-use retail and residential project pitched for that area to throw in the towel.

Developer Large & Co. envisioned a 75-unit micro-unit rental building (dubbed Hive) in the 700-block of Princess Avenue one block south of 2300 Douglas Street. The six-storey building, which would have catered to workers with fully-furnished micro apartments and communal cooking spaces on the ground floor, was rejected by City Hall in 2018. C

Receive Citified's timely real-estate news straight to your inbox. Sign up for our newsletter.
﻿