Pub to make way for 251-suite condominium project in Saanich 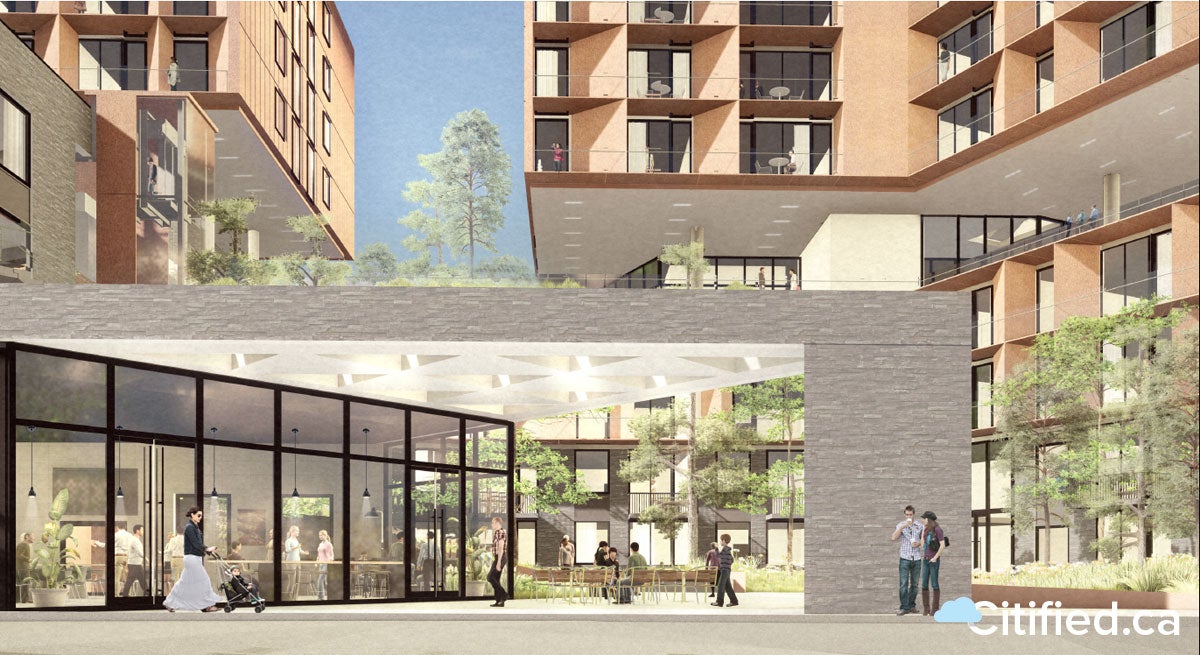 A proposal to redevelop several land parcels in Saanich’s Carey neighbourhood will include the former home of the Bird of Paradise Pub and its still-operating Bird Liquor Store, Citified has learned.

Development and construction firm Mike Geric Construction has submitted a rezoning application to the District for over 250 residences, plus 11,000 square feet of light industrial and 17,000 square feet of retail spaces within three buildings rising as high as ten-storeys at 750-760 Enterprise Crescent and 4291 Glanford Avenue.

From street level along the primary (western) frontage, given the land’s slope towards the Highway 17 corridor east of the properties, building heights will appear to rise to four and eight-storeys. At the centre of the project lands a public amenity area will serve as a community gathering space.

The unit make-up under the current design would include a mix of studio, one and two-bedroom suites while parking would be situated below grade. Of the 251 total residential units, 38 are targeted as rentals, with 19 managed by CRD Housing alongside 15% below-market rental rates.

Although mass timber technology could be used to build the project – as per the primary building material being utilized at Mike Geric Construction’s and Aryze Developments’ upcoming 12-storey Tresah condominium on Speed Avenue in Victoria – the decision to use concrete or mass timber has not been finalized.

The Bird of Paradise Pub, which closed down several years ago, will see its building razed to make way for construction. A future pub and restaurant could return as part of the new development. However, that aspect of the project is unlikely as preference has been provided to a non-profit childcare operator (yet to be chosen) to oversee 50 childcare spaces within one of the buildings.

With plans in their infancy, municipal approvals are not anticipated until some time in 2021 or beyond.

The company’s multi-phased Travino Royal Oak undertaking west of the avenue and near the intersection with Wilkinson Road has delivered some 250 residences throughout multiple buildings rising as tall as six-storeys. Meanwhile, construction is underway on the second phase of townhomes at The Reeve, a 36-home collection of park-side residences now selling along Viewmont Avenue west of Glanford Avenue near the Royal Oak Shopping Centre.